The groups are Addameer, al-Haq, Defense for Children Palestine, the Union of Agricultural Work Committees, Bisan Center for Research and Development, and the Union of Palestinian Women Committees.

Ahead of Israeli Defense Minister Benny Gantz's planned visit with the Biden administration following his abusive "terrorist" designation of six Palestinian civil society organizations, we, the undersigned, urge you to challenge the designation and raise its dangerous impact on both Palestinians and Israelis in any engagement with Israeli authorities. The administration must publicly and unequivocally reject Israeli authorities' attack on Palestinian civil society, call for the designations' immediate reversal, and meet with the six targeted organizations—ones that many of us have worked closely with for years.

Condemned by a chorus of officials and advocates internationally, this egregious attack on human rights threatens to shut down the work of prominent Palestinian civil society groups, some of which monitor abuses by both Israeli and Palestinian forces. According to an EU spokesperson, similar previously presented "allegations" have "not been substantiated" and showed no misuse of funds in supporting terrorism. The evidence Israeli officials claim to possess implicating the groups in "terrorist activity" remains secretive. We urge you to press Mr. Gantz to release the evidence, which news reports and the targeted groups' leaders allege not only fails to establish any links to violent activity, but is also based in large part on confessions obtained under torture—a blatant violation of international law—from prisoners who do not work for any of the NGOs. Some of our organizations—and UN experts—have extensively documented Israeli forces' use of torture against Palestinian detainees, including children.

Despite your pledge "to continue close dialogue with civil society organizations and human rights advocates," the State Department spokesperson said they are "not aware of any plans" to meet with the six organizations, as the EU has. Considering this pledge and the gravity of these allegations, we call on you to urgently meet with representatives of the six targeted Palestinian groups. For decades, Israeli authorities have systematically worked to silence Palestinian rights defenders, including many of the same ones targeted by this designation, increasingly emboldened by the international community's failure to challenge its grave abuses. That must change.

The same UN human rights experts have recently raised alarm about Israeli forces' "wider crackdown" on Palestinian rights defenders. In June, authorities raided the Palestinian Health Work Committees, arbitrarily shuttering its critical health services and jailing three of its members on questionable charges. Soon after reporting on Israeli soldiers' killing of an unarmed 17-year-old in July, Israeli forces raided the offices of Defense for Children International-Palestine (DCIP), one of the targeted groups, confiscating confidential files of DCIP-represented children detained by the Israeli military. In another violation of international law, authorities revoked the Jerusalem residency status of Salah Hammouri, a long targeted Palestinian rights defender with Addameer—another one of the six NGOs targeted just days later.

Your administration committed to "protecting and supporting human rights defenders [as] a key priority." No country—Israel or any other—can be an exception. This is a critical chance to prove that commitment.

The U.S. Must Impose Khashoggi Ban on Israeli Officials Engaged in Surveillance of Palestinian Activists

DAWN helps lead a coalition of 46 other organizations urging members of Congress to oppose the Biden administration's $650million...

Verdict on Hossam Bahgat speech charges in response to critical tweet, due November 29. 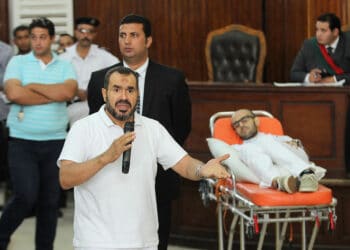