Who Was Jamal Khashoggi?

WHO WAS JAMAL KHASHOGGI?

Jamal Khashoggi was a fierce advocate for democracy, human rights and the rule of law. He believed that respect for political and civil rights of all individuals would provide the solution to the problems of war and instability that plagued the Arab world. As a journalist and as an adviser to members of the ruling elite, Khashoggi tried to work from within the system, advocating for democratic reforms. When working from within became no longer possible, Khashoggi continued the struggle from without. From self-exile in the United States, Khashoggi became an outspoken critic of the anti-democratic forces of oppression. In the end, those forces of oppression could no longer abide this champion of democracy. Khashoggi was murdered for the power of his ideas, and because, even in the face of mortal danger, he refused to remain silent.

Jamal Khashoggi was born on October 13, 1958 to a wealthy and well-connected family living in Medina, Saudi Arabia. Khashoggi's grandfather Mohammad Khashoggi had been the personal physician to King Abdul Aziz, the founder of the Kingdom. His uncle Adnan Khashoggi became a billionaire celebrity arms dealer.

Khashoggi attended elementary and secondary school in Saudi Arabia, before traveling to the United States to attend Indiana State University. After obtaining a degree in business administration in 1982, Khashoggi returned home and launched his career in journalism. He became a correspondent for several different English and Arab language papers, including the Saudi Gazette, Asharq Al-Awsat, Al-Majalla, and Al-Muslimoon.

Khashoggi rose quickly through the ranks of his profession. In 1991, he became Managing Editor, then acting Editor-in-Chief of Al-Madina, Saudi Arabia's oldest newspaper. In 1999, Khashoggi became Deputy Editor-in-Chief at Arab News. As with most prominent newspapers in Saudi Arabia, Al-Madina and Arab News had close ties to the royal ruling elite, which in turn had close ties to the conservative Wahabi religious establishment. These close ties constrained the acceptable range of opinions that could be expressed and would lead more than once to Khashoggi's dismissal.

After Al Qaeda's attack on the World Trade Center on 9/11, Khashoggi became more concerned with the dangers posed by Islamic extremism. While he had supported Bin Laden's resistance to the Soviets in Afghanistan, he was deeply opposed to Bin Laden's turn to terrorist attacks against civilians. One year after 9/11, Khashoggi wrote, "Osama bin Laden's hijacked planes not only attacked the Twin Towers of the Word Trade Center and the Pentagon. They also attacked Islam as a faith. They attacked the values of tolerance and coexistence that Islam preaches."

Khashoggi urged Saudis to take responsibility for the culture that had nurtured the Al Qaeda terrorists. "Since Sept. 11 we have busied ourselves trying to counsel the Americans, trying to point out where they went wrong … [W]hy not try to remedy the deficiencies in our own society? Why not try to answer the question that the Americans have been asking us incessantly: Why did 15 of your young men take part in the attacks?"

Two years after the 9/11 attacks, in 2003, Khashoggi became Editor of Al-Watan, one of the most read papers in Saudi Arabia. He was fired less than two months later after running afoul of the Saudi conservative Wahabi establishment. Under Khashoggi's stewardship, Al-Watan had, among other perceived offenses, posted a petition asking the Saudi government to take action to curb extremist religious discourse. Worse still, after a May 2003 Riyadh suicide bomb attack by Al Qaeda on an affluent housing compound inhabited mostly by Westerners, Khashoggi penned an impassioned article that seemed to draw a connection between the attackers and those members of the Wahabi clerical establishment who "instigated and justified the attacks."

In 2003, after his firing from Al-Watan, Khashoggi took a break from journalism, becoming an adviser and spokesperson to Prince Turki al-Faisal, the Kingdom's Ambassador to the United Kingdom. When Prince Turki moved to Washington in 2005, as the new Saudi Ambassador to the United States, Khashoggi moved with him, and remained as his adviser and spokesperson until Prince Turki's resignation in December 2016.

After four years working with Prince Faisal, Khashoggi returned to journalism in Saudi Arabia, becoming Editor of Al-Watan in 2007 for a second time. This second stint lasted longer than the first but ended in similar fashion. In 2010, after three years at the paper, Khashoggi was fired for publishing pieces deemed offensive to the conservative Wahabi religious establishment, including articles on the religious police's abuse of power and women's rights. By that time, Khashoggi's liberal views were, in his own words, "pushing the boundaries of debate within Saudi society."

Following his second dismissal from Al Watan, Khashoggi began regularly publishing opinion columns in Al Arabiya, a Saudi news channel and website. Khashoggi's articles covered a broad range of political and national security issues, but frequently returned to the theme of democratic reform in the Arab world. Democracy, Khashoggi wrote, is "the most effective way to tackle terror, stop bloodshed and political violence in Arab countries."

In 2015, Khashoggi sought to launch a new private satellite channel based in Bahrain, funded by Prince Al-Waleed bin Talal, a global business leader and one of the more progressive members of the Saudi royal family. Called Al-Arab, the news channel was supposed to allow for a greater diversity of opinion and criticism of government policy than would have been tolerated in state-regulated news organizations. Al-Arab never got off the ground. After six hours on the air, Bahraini officials shut down the news channel following an Al-Arab interview with Khalil al-Marzouq, a government critic and member of Bahrain's Shia opposition Al-Wefaq party. Explaining the reason for the shutdown, Bahrain's Information Affairs Authority stated that Al-Arab had failed "to take account of efforts aimed at stemming the tide of extremism and terrorism."

During this period, there was an important change in the leadership of the Saudi royal family. With the death of Saudi King Abdullah bin Abdulaziz in January 2015, his half-brother Salman bin Abdulaziz Al Saud assumed the throne. With his ascent, King Salman appointed his favorite son Mohammed bin Salman, or MBS, as Defense Minister.  In March 2015, barely two months after he took over the Defense Ministry, MBS ordered the Saudi Air Force to start bombing Yemen, which was in the midst of a civil war. It was the kind of brash and brutal act that would characterize other future decisions made by the ambitious and inexperienced MBS and that would bode ill for Jamal Khashoggi.

On November 10, 2016, Khashoggi criticized U.S. President-elect Donald Trump, calling his stance toward the Middle East "contradictory." Khashoggi's criticism of the President-elect disturbed the Saudi royal court, many of whom supported Trump. Within days of Khashoggi's criticism, the Saudi government made clear that Khashoggi's views were his alone. "The author Jamal Khashoggi," a Saudi official stated, "does not represent the government of Saudi Arabia or its positions at any level."

Saudi rulers weren't content with distancing the government from Khashoggi's criticism, though. Perhaps it was the influence of the rising MBS who would soon develop a close connection to the Trump administration. Toward the end of November 2016, Saudi rulers banned Khashoggi from writing in newspapers, appearing on TV and attending conferences. According to one report, one of MBS's close advisers Saud al-Qahtani called Khashoggi and told him, "You cannot tweet, you cannot appear on TV, you cannot write — period."  At the end of the conversation, Qahtani reportedly said, "You can't do anything anymore — you're done."

Less than a year later, in June 2017, alarmed at the spate of arrests of leading public intellectuals and writers in the Kingdom, Khashoggi made the painful decision to move to the United States. That same month, King Salman removed his nephew Muhammed bin Nayef from the position of Crown Prince and replaced him with MBS. He also named MBS as Deputy Prime Minister.

In September 2017, Khashoggi became a contributing columnist for the Washington Post. In his first article, Khashoggi explained his reason for choosing "self-exile," describing the climate in Saudi Arabia of "fear, intimidation, arrests and public shaming of intellectuals and religious leaders who dare to … express opinions contrary to those of my country's leadership."

In the United States, Khashoggi took full advantage of his new freedom. He wrote and spoke boldly, advocating for freedom of speech and democracy. He criticized the Saudi regime's imprisonment of political activists, and the Saudi's conduct in the war with Yemen, calling for a ceasefire and peace talks.

From Saudi Arabia, the new Crown Prince MBS and the Saudi regime followed Khashoggi's activities closely and were disturbed by his continued criticism of Saudi policies. They tried to pressure Khashoggi to remain silent, banning his son from leaving the Kingdom, effectively holding him hostage. Emissaries of MBS also tried to persuade Khashoggi to return to Saudi Arabia, assuring him that he would not be harmed upon his return, even offering him a high-level job in the government. Khashoggi remained skeptical of these assurances. As Khashoggi continued to criticize Saudi policies, the Saudis under the direction of MBS escalated their efforts to intimidate and silence him, hacking into his phone.

MBS and the Saudi rulers were most likely hesitant to employ violence against Khashoggi while he remained in the United States, not wanting to offend their powerful patron. They seized the opportunity to strike when Khashoggi traveled abroad.  Khashoggi went to Turkey with his fiancée Hatice Cengiz to obtain the necessary paperwork to finalize their marriage, after consular officials at the Saudi Embassy in Washington, DC informed him that he would have to obtain necessary documents there.

By the time Khashoggi entered the Saudi Consulate in Istanbul in the early afternoon of October 2, 2018, the Saudis had flown in a special operations team to murder the defiant dissident. Turkish Intelligence indicated that Khashoggi may well have been dead within ten minutes of entering the Consulate.

By murdering Khashoggi, the Saudi rulers extinguished a powerful voice for freedom and democracy in the Arab world. They did not, however, extinguish the reformist ideas that Khashoggi had championed.  Nor did they anticipate the power and extent of the global backlash caused by his brutal murder. 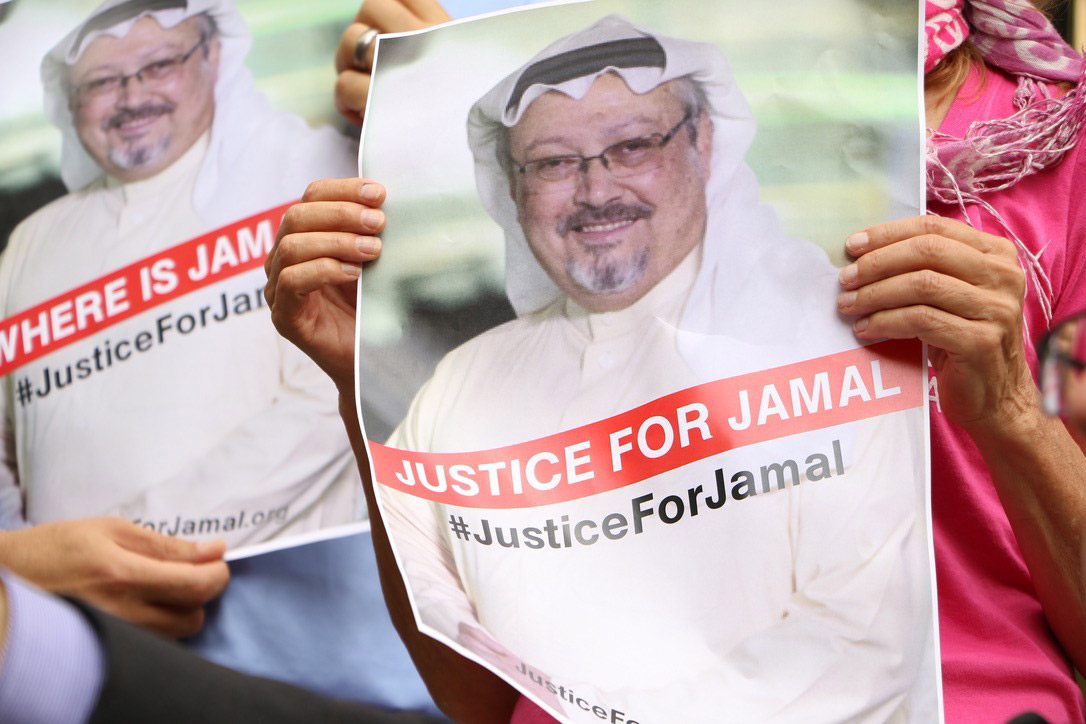