Biden Should Release the CIA Report on Jamal Khashoggi's Killers

Six weeks after Saudi operatives brutally killed the journalist Jamal Khashoggi at the Saudi Consulate in Istanbul in October 2018, the CIA leaked its conclusion that Saudi Crown Prince Mohammed bin Salman had ordered the assassination. Since then, the U.S. Congress has tried without success to force the Trump administration to reveal the U.S. intelligence community's findings regarding the culprits.

President-elect Joe Biden should finally release this information when he takes office on Jan. 20; publicizing the CIA report would fulfill his promise of accountability for the assassination of a U.S. resident. If the Biden administration doesn't move voluntarily, a U.S. court may force its hand.

Since Khashoggi's killing on Oct. 2, 2018, U.S. President Donald Trump and his administration have done everything they can to shield Mohammed bin Salman from association with the crime. But the Trump administration's efforts to let bygones be bygones have faced considerable resistance from within the U.S. government. Congress held hearings and passed resolutions condemning the killing and declaring the Saudi crown prince responsible for it.

Lawmakers upped the ante in March 2019 and then again in July 2019, passing legislation to block U.S. military assistance to Saudi Arabia. Trump summarily vetoed both measures, keeping the arms flowing to the autocratic Saudi regime. In response, in December 2019, Congress inserted provisions in that year's National Defense Authorization Act requiring the administration to provide an unclassified report identifying any individuals involved in Khashoggi's killing. Passage of the bill represented a rare bipartisan consensus that the American people had a right to know the identities of the killers.

Regardless of congressional efforts, Trump and his underlings had no intention of abandoning Mohammed bin Salman. In February 2020, a month after the legislative deadline, the Office of the Director of National Intelligence (ODNI) delivered to Congress the report on Khashoggi's killing, which reportedly included the CIA's intelligence about the pivotal role of the crown prince. But ODNI rejected the legislation's mandate to submit an unclassified report, claiming that doing so would jeopardize intelligence sources and methods.

As the Trump administration defied Congress, the Open Society Justice Initiative sued ODNI in August 2020 under the Freedom of Information Act, seeking public disclosure of the report. (It was actually the second lawsuit filed by the initiative involving Khashoggi's killing. The first, filed in January 2019, had a more general focus, demanding that the CIA and six other federal agencies disclose "all records relating to the killing of U.S. resident Jamal Khashoggi.") The administration has adopted the same legal posture in court as it has with Congress, claiming that releasing information about Khashoggi's killers would reveal classified intelligence information and harm U.S. national security.

The government's national security argument is fundamentally flawed for multiple reasons. The government can redact appropriate portions of its reports to reveal the identities of the killers while concealing how it reached its conclusions. Indeed, Trump himself already has alluded to the crown prince's role in the killing, boasting of how he "saved his ass." In addition, countervailing and powerful national security considerations—including the security of U.S. residents targeted by foreign governments—weigh in favor of unmasking Khashoggi's killers. Shielding evidence that reveals the role of Mohammed bin Salman and the Saudi regime in killing a U.S. resident will only encourage them and other autocrats to believe that the U.S. government will cover for them.

There's also a long-term security cost to siding with brutal dictators who are key sources of regional instability and inherently vulnerable, as they constantly seek to stifle and crush dissent. Not only are U.S. officials contributing to their abuses by shielding them from accountability, but Washington is also left holding the bag when they inevitably face popular resistance.

Bald, unexamined claims of national security interest should not relieve the U.S. government of its duty to release information in the public interest, and a federal judge agrees. On Dec. 8, 2020, U.S. District Court Judge Paul Engelmayer ordered the CIA and ODNI to disclose the existence of, and explain the basis for withholding, two items: the audio tape of Khashoggi's killing and the CIA's report on the matter.

Engelmayer chided the government for failing to provide any reasoning for its national security claims: "In neither their public nor their classified filings do defendants explain at all why the disclosure of the limited information … would reveal intelligence sources and methods." A national security claim, Engelmayer explained, cannot stand alone; it must be able to withstand some measure of scrutiny.

Ultimately, the U.S. judiciary will have its say if the executive branch tries to conceal information from the American people—which Congress has demanded be public—on national security grounds. Regardless, the Biden administration should keep its promise for accountability for Khashoggi's killing and release the relevant information with or without the specter of a lawsuit to force its hand.

Jack Steele is a lawyer and research assistant at Democracy for the Arab World Now. Twitter: @JackPatSteele

Photo: A shadow of a security member of the consulate is seen on the door of the Saudi Arabian consulate on November 1, 2018 in Istanbul. – Journalist Jamal Khashoggi was strangled as soon as he entered the Saudi consulate in Istanbul and his body was dismembered and destroyed as part of a premeditated plan, Turkey's chief prosecutor said on October 31, making details of the murder public for the first time. (Photo by OZAN KOSE / AFP) (Photo credit should read OZAN KOSE/AFP via Getty Images)

Is the UAE Bringing the Israelis Into Socotra?

Biden Should Release the CIA Report on Jamal Khashoggi's Killers

Saudi Arabia: Government Sentences Woman to 45 Years for Her Tweets

More than 30 NGOs call on the international community to press Saudi authorities to release student and peaceful women's... 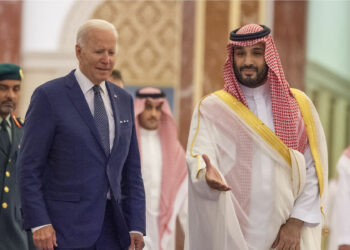 MBS and His 'Tiger Squad' Tortured and Disappeared My Father. Then I Was Arrested

Saudi authorities abducted, tortured and forcibly disappeared my father, Sulaiman al-Dowaish, a religious scholar, in 2016. They are now...

Biden Should Release the CIA Report on Jamal Khashoggi’s Killers