The Precarious Lives of Fixers—Journalism's Essential but Uncredited Go-Betweens

Editor's note: The following excerpt is adapted from Fixing Stories: Local Newsmaking and International Media in Turkey and Syria, by Noah Amir Arjomand (Cambridge University Press, 2022). The characters are composites based on ethnographic research conducted in Istanbul and Diyarbakır from 2014 through 2016.

"I call myself a rat," Solmaz confessed to me over posh coffee at a café on Istanbul's European side. It was 2016, and Turkey was the center of the world. Istanbul was a boom town for correspondents reporting on the European refugee crisis, the Syrian civil war, the Kurdish conflict, jihadist terrorism and Turkey's own controversial president. It was also a boom town for the fixers who assisted those foreign correspondents.

Solmaz was new to the fixing game. She had recently left a career as a journalist in Turkey's national press. When her newspaper changed ownership and started printing government propaganda, a colleague advised she parlay her combination of English language and reporting abilities into a fixer's day rate that would keep her afloat. But as we sipped our coffees, she was soul-searching after a particularly grating experience with a foreign correspondent I will call Fred. Fred covered the whole of the Middle East for his newspaper and had recently arrived for a brief trip. A parachutist, in journo lingo. He hired Solmaz to help him get around town, connect him with sources, translate, provide background information.

Fred came to Istanbul to do a feature on the country's beleaguered LGBT community, but then had the mixed luck of also being in town on the occasion of a suicide terrorism attack. Fred and Solmaz rushed to the scene of the crime. Solmaz translated for Fred and convinced witnesses to do interviews. Fred wanted to get close to the blast site for photos, but police made him stay back from an area that they had cordoned off. He angrily protested that the cops had a "typical third-world mentality," and his anger extended to Solmaz for not fighting or sweet-talking strongly enough to get him better access—part of her job as his fixer, as he saw it.

Once the attacker was identified as an operative of the self-proclaimed Islamic State, or ISIS, Fred next wanted to go to Çarşamba, Istanbul's most religiously conservative neighborhood, infamous as a recruiting ground for ISIS and other extremist groups. Solmaz refused, saying that it was too dangerous.

By this time, she had decided that Fred was too bullheaded and conspicuous for her to trust him to be sensitive to cultural difference or to keep a low profile. He did not seem to be listening to her coaching: open with small talk, answer sources' questions about yourself before asking questions of them—especially sources steeped in a tradition of paranoia about foreign agents.

Fixers are caught between reporters and sources, between worlds with different cultural and political norms. Fixers' in-betweenness is both what makes them useful in the first place and the principal source of their stress and self-doubt.

Fred meanwhile mistook Solmaz's unwillingness to broker man-on-the-street interviews with ultraconservatives—coupled with her ease talking with LGBT activists for their previous story—for antipathy toward religion. He categorized Solmaz as a secular elitist and grew dismissive of her advice and explanations. He did not trust her to be objective.

"I understand Islam!" Fred huffed in response to Solmaz's attempt to correct one of his misperceptions. Fred had to rely on Solmaz nonetheless, and the pair ended up settling on a routine story for the foreign press that year: the decline of tourism to beautiful, historic, tragic Istanbul in the wake of the latest violence. It was an easy compromise for a reporter and a fixer who were at odds and under deadline. At the Grand Bazaar, they talked to shopkeepers and tourists who said predictable shopkeeper and tourist things, and Solmaz secured Fred an interview with a tourism official —nobody she had labored to cultivate as a source, no bridge she worried Fred would burn. Despite her assistance, Fred decided, without consulting her, against giving Solmaz a "contributed to this report" credit on the articles they produced together. She griped to me of this snub to her sense of professionalism, even as she claimed not to want her name on his cliché stories anyway. Fred flew out a few days later, on to another country and another fixer.

Solmaz called herself a rat because she felt at that moment that her job, fundamentally, was to betray sources, to open doors and feed information to foreign reporters who did not respect those sources or consider their views beyond categorizing them according to lazy stereotypes. Fred, at least in Solmaz's telling, seemed to consider her a rat of another kind: betraying journalism for a secret allegiance to a local political faction (secular elitists, in his misunderstanding).

Fixers are caught between reporters and sources, between worlds with different cultural and political norms. Fixers' in-betweenness is both what makes them useful in the first place and the principal source of their stress and self-doubt. Fixers face reporters' expectations from one side and sources' expectations from the other. When those expectations clash, fixers are thrust into states of moral ambivalence. Fred demands that Solmaz press dubious sources with uncomfortable questions, while those sources simultaneously demand Solmaz side with them against the suspicious foreigner. Solmaz feels like a rat because it can feel immoral to act as a proxy for a reporter—especially one like Fred—in extracting what they want from resistant local sources. 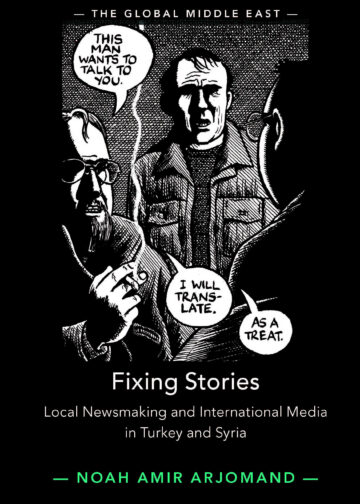 To avoid being caught in the middle of conflict, fixers get creative. They matchmake between compatible reporter-source pairs, like a writer who thinks their editor will be happy with a piece on the plight of Istanbul tourism and bazaar merchants glad to have an audience for their grumbles. They avoid matching short-term clients whom they do not trust with long-term sources with whom they have built up trust. They act as a buffer or reconcile differences between potentially clashing reporters and sources, as when Solmaz tried to coach Fred on culturally appropriate ways to approach sources and broach sensitive topics.

These strategies are not always possible and do not always work; sometimes, as with Solmaz, fixers' very attempts to manage the contradictions of in-betweenness discredit them to reporters or sources. But in success or failure, they shape what becomes news. An article appeared one day, in June 2016 in a major newspaper, about the deep discounts that tourists could find in Istanbul shops, in lieu of an article about ISIS recruitment in the same city, because Solmaz was more comfortable bringing Fred to the Grand Bazaar than to Çarşamba. Despite her part in determining what would become international knowledge about Turkey, Solmaz remained invisible to readers.

A Canadian reporter whom I will call Sally and a Syrian fixer whom I will call Karim chased that same terror attack story. Also based in Istanbul, Sally and Karim had a network of sources within Syria to tap, once authorities identified the suicide bomber as a Syrian national who had recently crossed into Turkey from the south. Unlike Fred and Solmaz, Sally and Karim had worked together for some time, long enough to trust each other, to know each other's blind spots, to become friends. Lovers too, but we will get to that later.

Karim reached out by phone to ISIS defectors and to sources with relatives in the Islamic State, asking if they knew the bomber. One heard a rumor he was from a town where Karim had a friend. Karim called the friend, who put Karim in touch with people who had known the bomber growing up. Karim also posted on Facebook that he was on the hunt for information; another friend responded that one of his own Facebook contacts had just posted about knowing the bomber from years back and being shocked. Both friends were willing to vouch for Karim as trustworthy and so help persuade sources to consent to interviews via Facebook or WhatsApp or Skype.

Sally was able to write a long profile on the bomber within days of the attack thanks to Karim's efforts and social network. Crucially, Karim was not only just a few degrees of social separation from the bomber, but also willing to call in favors and stake his own reputation that Sally would report the story in a way that maintained Karim's bridges to his contacts and kept sources living under militant rule in Syria out of danger.

Fixers' strategies for brokering information and managing relationships with reporters and sources evolve hand in hand with their own positions in journalism and in local societies.

Differences in the fixer-reporter relationship explain some differences between Solmaz's and Karim's respective performances on the Istanbul bombing story. Fred parachuted in and hired Solmaz for a few days' work. That was not enough time for much trust to develop or for them to understand each other beyond the level of stereotype. It was no wonder that Solmaz was unwilling to risk long-term relationships with sources for a client who would soon move on to the next country. By contrast, Karim and Sally had devoted years to their mutual apprenticeship, Karim learning about journalism and Sally about Syria. Sally expected to continue working with Karim and so had greater reason than Fred to care about her fixer's morale and rapport with sources.

Differences in Karim's and Solmaz's respective places in the history that was unfolding around them also help explain the direction each took in reporting the event. Their individual stories were embedded in the larger stories of the era's Turkish politics and Syrian civil war, and the larger-still history of the region's interactions with the rest of the world.

Each fixer was on their own trajectory within these larger histories: Solmaz from a local reporter for an opposition press being crushed by an authoritarian president to a behind-the-scenes broker learning to view her country through foreign eyes; Karim from penniless refugee to central player at the intersection of Syria-focused journalism, humanitarianism, militancy and espionage. These trajectories influenced whom they interacted with, on what terms and with what aspirations. Fixers' strategies for brokering information and managing relationships with reporters and sources evolve hand in hand with their own positions in journalism and in local societies.

Broad trends of cultural politics are also among the cards that fixers are dealt. Fred's confidence in applying half-baked stereotypes and his sense of entitlement and distrust for Solmaz were not merely personal idiosyncrasies. Whether he realized it or not, Fred's understanding of the world and his place within it was informed by a well-worn master narrative, which literary critic Edward Said called Orientalism, that presents an exotic, backward Middle East as a foil for the rational, modern West and justifies Western domination over Muslims especially.

The point is, if we want to understand why the international media covers stories the way it does, we need to burrow all the way down into fixers' ever-changing moral worlds without losing sight of their connections to larger political contexts.

'They Should All Go.' Are the Hopes of the Hirak Protest Movement Fading in Algeria?

Israel’s Supreme Court is a stronghold of justice for Jews only. It does not champion universal human rights, but...

‘They Should All Go.’ Are the Hopes of the Hirak Protest Movement Fading in Algeria?