The administration maintained the block on $130 million of the restricted aid on unspecified human rights conditions. The waiver on the majority of the blocked aid signals the Biden administration's support for Egypt's autocratic ruler, President Sisi, at the expense of human rights and the rule of law for the Egyptian people.

"The Biden administration is talking out of both sides of its mouth, attempting to maintain its human rights rhetoric by leaving a tiny portion of U.S. military assistance to Egypt blocked, while ultimately keeping 90 percent—over $1 billion—flowing into President Sisi's hands," said John Hursh, DAWN Program Director. "The bottom line is that President Biden has backtracked on a key campaign promise and is still stuck in the same outdated partnership with Egypt's authoritarian government," Hursh added.

There is also a specific provision requiring the Secretary of State to determine and report that the Egyptian government is "making clear and consistent progress in releasing political prisoners and providing detainees with due process of law." The Egyptian government has not met any of these conditions. If anything, human rights abuses tied to these conditions have deteriorated even further since Congress imposed these restrictions.

"The Biden administration's duplicitous allocation of military aid to Egypt is the same sort of doublespeak that we heard when it blocked 'offensive' arms sales to Saudi Arabia while leaving 'defensive' weapons sales in place."

The Biden administration reportedly will release $170 million of the blocked aid but restrict its use to counterterrorism, border security, and nonproliferation.

"The Biden administration's duplicitous allocation of military aid to Egypt is the same sort of doublespeak that we heard when it blocked 'offensive' arms sales to Saudi Arabia while leaving 'defensive' weapons sales in place," said Hursh. "Just like Saudi Crown Prince Mohamed bin Salman, President Sisi has all the reassurance he needs that not much is going to change from this new administration."

U.S. law prohibits providing military assistance to governments that commit serious human rights abuses. The Arms Export and Control Act addresses human rights abuses though its general provisions, while the Foreign Assistance Act (FAA) specifically prohibits providing security assistance to foreign governments that have engaged in a "consistent pattern of gross violations of internationally recognized human rights." The president may waive the FAA restriction only if he or she provides Congress with a written certification that "extraordinary circumstances" justify the action. 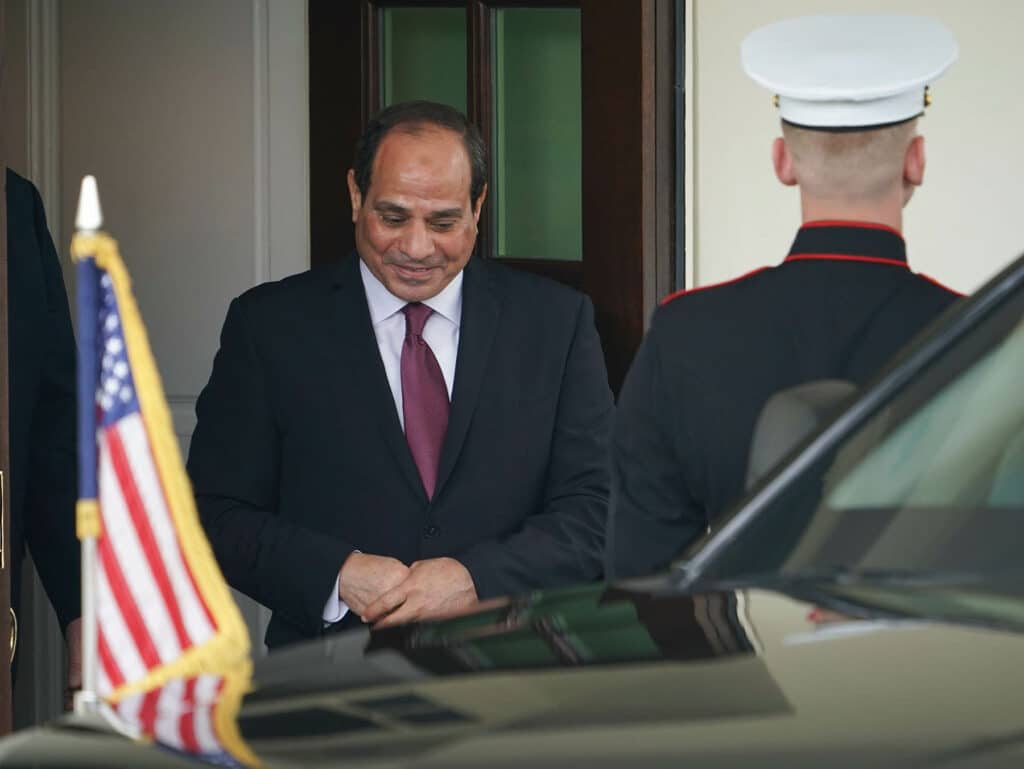 Despite the FAA restriction, which should have banned aid to decades of Egypt's systematically abusive governments, the U.S. government has provided Egypt an average of $1.3 billion of military assistance each year since 1987 through the Foreign Military Financing (FMF) program. Repeated efforts by Congress over the past several decades to condition military aid to Egypt based on human rights reforms have almost always been temporary, waived, or certified as having satisfied the stated conditions, with no meaningful evidence of reform.

"The Biden administration's waiver on the bulk of restricted aid is only the latest example of why conditioning military aid to abusive governments like Egypt simply does not work: it has hardly ever been enforced, and autocratic leaders like Sisi know that better than the U.S. government does," Hursh said. "The issue here isn't really whether the Sisi government will make meaningful reforms—it won't—it's about the United State's persistent breach of domestic and international law that prohibits arming abusive governments and contributing to their abuses."

Due to this waiver, U.S. military assistance will provide a significant boost to a government and military synonymous with extrajudicial killings, political violence, and human rights abuses. The State Department's 2020 Country Report on Human Rights in Egypt documents gross violations of human rights including unlawful or arbitrary killings, extrajudicial killings by the government or government agents, forced disappearances, torture, and numerous cases of cruel, inhuman, or degrading treatment. The government's arbitrary detention and harsh treatment of political prisoners and its constant attacks on journalists and civil society are especially troublesome, while its widespread suppression of the freedom of speech, freedom of information, and freedom of assembly culminate in a climate of stifling repression. The near total impunity for government actors committing these offenses only adds to this repressive environment.

"U.S. military assistance simply should not support a foreign government or military with a record of human rights abuses as shocking and systemic as that of Egypt under Sisi."

Under Sisi, the Egyptian government has arrested at least 60,000 political prisoners. Thousands of prisoners are held indefinitely without due process. Prison conditions are reprehensible, torture is widespread, and prison healthcare is all but nonexistent, if not purposefully withheld. Human rights organizations have documented how the Egyptian government's torture of detainees leads to radicalization and recruitment by extremist organizations including ISIS. In 2020, Egyptian officials carried out more executions than any country in the world other than China and Iran. The Egyptian government continues to sentence political prisoners to death, including 12 men currently awaiting execution after a sham trial involving 739 defendants.

"President Biden promised Americans and the world that under his leadership, U.S. foreign policy would prioritize human rights, the rule of law, and democratic values, but today's decision repeats outdated arguments for Egypt's value as a security partner and shows a deep gulf between the administration's rhetoric and its actions," said Hursh.

The Sisi government has also targeted U.S. citizens. Moustafa Kassem died in Egyptian detention in 2020. Kassem was arrested in 2013 and sentenced to 15 years imprisonment in 2018. Before his death, he stated that his heart condition and diabetes were largely untreated. Mohamed Soltan also was arrested in 2013. He spent two years in an Egyptian prison for peaceful political advocacy, where officials tortured him and subjected him to inhuman treatment. He was only released in 2015 after sustained political pressure from the Obama administration. Soltan is now back in the United States, but Egyptian officials continue to harass his relatives still living in Egypt.

During a visit to Washington this July, Egyptian Intelligence Chief Abbas Kamel upbraided U.S. officials for not upholding a life sentence for Soltan, going so far as to present U.S. officials with a document alleging a deal between Egypt and the United States that Soltan would serve the remainder of his sentence in a U.S. prison. These actions demonstrate just how far the Sisi government is willing to go to punish its critics and how little it cares about U.S. criticism as long as U.S. military aid continues to fill the government's coffers.

"Biden promised to be different, but so far, it has been more of the same. To allow the Egyptian government again to receive over a billion dollars in military aid without any genuine effort to respect human rights sets a terrible precedent for autocratic leaders throughout the Middle East and North Africa," Hursh said. "That the administration would issue this waiver when Egypt's human rights record is as appalling as it is—attested by the State Department's own reporting—and when U.S. citizens remain victims and targets of these abuses is difficult to understand."

To obscure these wrongdoings, the Egyptian government has employed several high-profile D.C. lobbyists to refurbish its image and make the case for continued U.S. support. These lobbyists repeat the same unconvincing arguments for Egypt's value as a security partner outweighing its human rights abuses. Egypt already receives $1 billion in U.S. funding without any human rights restrictions. Further, on February 17, the Biden administration approved a $197 million arms deal with the Egyptian government, supplying the country with missiles and calling the matter "routine."

On August 10, senior administration officials testified before a Senate Foreign Relations Subcommittee hearing on U.S. security assistance in the Middle East in support of providing military assistance to the Egyptian government. These officials repeated a familiar trope, stating that U.S. officials have raised human rights concerns in Egypt "at the highest level of government," but also stressing that Egypt is a "crucial security partner" of the United States.

"President Biden promised Americans and the world that under his leadership, U.S. foreign policy would prioritize human rights, the rule of law, and democratic values, but today's decision repeats outdated arguments for Egypt's value as a security partner and shows a deep gulf between the administration's rhetoric and its actions," said Hursh.

For DAWN's research on how conditioning aid does not improve human rights outcomes from abusive governments within the Middle East and North Africa, including a recent workshop co-hosted with the MIT Center for International Studies, see here.

WASHINGTON, DC - JULY 20: (L-R) Secretary of State Antony Blinken looks on as U.S. President Joe Biden speaks at the start of a Cabinet meeting in the Cabinet Room of the White House on July 20, 2021 in Washington, DC.

Will America Ever Reckon With the Human Cost of the Afghanistan War?

The International Monetary Fund’s new US$3 billion loan agreement with Egypt largely continues an economic approach that leaves the economic rights of millions...