The Trump administration's rush to protect the president's friends and allies from the justice system isn't necessarily limited to Americans. It may well include Saudi Crown Prince Mohamed bin Salman (MBS), currently being sued in three cases in federal court, including for the murder of Jamal Khashoggi. Shielding MBS from liability by the State Department's recommending the courts grant him immunity would effectively be like pardoning him for murdering US resident Jamal Khashoggi, notably on the heels of Trump's pardon last week of American Blackwater contractors who massacred Iraqi civilians. It would mark an unprecedented and dangerous extension of the legal doctrine of immunity serving only President Trump's relentless efforts to protect MBS from the consequences of his criminal and violent actions.

The State Department is reportedly considering the Crown Prince's request for immunity in a lawsuit in the Southern District of New York involving the attempted murder of former Saudi official Dr. Saad Aljabri, but there are in fact no legitimate, legal grounds to support this request. MBS filed a motion to dismiss the lawsuit claiming immunity from suit in U.S. courts based on two doctrines of immunity. Arguing for "status-based" immunity, the Crown Prince contends that as Saudi Arabia's de facto head-of-state, he is entitled to absolute immunity regardless of the allegations against him. But this argument fails for a simple reason. The status-based immunity that MBS seeks accrues only to the actual head of state – his father, King Salman, still alive, still governing – not the Crown Prince, whose status can be withdrawn at any time. And, indeed, King Salman has played musical chairs before, replacing Mohamed bin Nayef with MBS in 2017. It would simply be a leap too far to extend head of state immunity for someone in this position. The State Department refused to recognize head-of-state immunity for another Crown Prince, the UAE's Mohamed bin Zayed, for exactly these reasons in 2010.

In the alternative, MBS also argues he deserves a form of "conduct-based" immunity. Specifically, he argues that he is immune from suit because the conduct at issue – sending his Tiger Squad hit team to kill Aljabri – never occurred or, alternatively, if it did, was an act committed in his official capacity as Crown Prince. Whether or not the Saudi government chooses to claim an attempted extrajudicial killing as an official act of state, such an act violates fundamental, or jus cogens, principles of international law. A US Court of Appeals has already ruled that such acts cannot qualify as "official" for purpose of immunity determinations (referring also to the specific legislative history of the Torture Victim Protection Act). The more recent work of the United Nations' International Law Commission also points in this same direction.

Although MBS' claims of immunity are legally flawed, it's not clear how the court would rule on them. In accordance with Supreme Court rulings, the federal district court would show absolute deference to the State Department's recommendation to grant MBS "head-of-state" sovereign immunity. With respect to conduct-based immunity claims, the weight of the State Department's judgment is more uncertain but still carries, at the very least, "substantial weight."

A State Department recognition of immunity in the Aljabri case would almost certainly apply to the lawsuit pending against MBS for the murder of Jamal Khashoggi. Democracy for the Arab World Now, founded and headed by Khashoggi shortly before his death, together with his widow, Hatice Cengiz, filed a suit against MBS and his co-conspirators in a federal court in Washington, DC in October seeking accountability for the murder. Our lawsuit alleges that MBS deliberately lured Khashoggi from his home in Washington D.C. , and violated not just international laws, but also other US domestic laws, in the process. A State Department immunity recommendation would block the single most important effort to bring justice through the courts against Khashoggi's killers, and, in the words of Aljabri's son Khalid Aljabri, providing MBS a carte blanche "license to kill."

The Trump administration's recent media leaks suggest the State Department may indeed recommend immunity for MBS, in keeping with the president's longstanding policy of protecting MBS seemingly at all costs. After the murder of Khashoggi, President Trump refused to condemn MBS and instead cast doubt on his role in the crime, despite the CIA's assessment that MBS ordered the murder. Trump also has defied Congress, vetoing two bills designed to punish MBS by cutting off arms sales to Saudi Arabia. And the Trump administration has refused to comply with legislation requiring the Director of National Intelligence to provide an unclassified report that reveals the role of MBS in the murder; President Trump instead privately bragged to Bob Woodward about how he "saved his [MBS'] ass" from accountability for the murder.

If the State Department decides to expand its interpretation of status-based immunity to encompass royal princes, or broaden conduct-based immunity to include extrajudicial killings, it would open a pandora's box of immunity claims by high-level thugs across the globe who commit grievous crimes against US and non-US citizens, while dramatically limiting the ability of victims to seek redress against criminals operating with a guise of state title. It would also be another stay of justice for the friends and families of Aljabri, Khashoggi, and others scarred by MBS's reign of terror.

Perhaps seeking his own rehabilitation, Attorney General William Barr recently found cause to resist President Trump's demand to use the power of the Justice Department to pursue false allegations of widespread election fraud. Secretary of State Mike Pompeo should follow suit and refuse to do President Trump's bidding in the Aljabri case. If Pompeo doesn't, responsibility will fall upon the Biden administration to reverse any recognition or suggestion of immunity for MBS and open the way for US courts to deliver a measure of accountability for the Crown Prince's crimes in accord with international and U.S. domestic law.

Photo credit: Seated under a portrait of the Saudi monarch, US Secretary of State Mike Pompeo (L) meets with Saudi Arabia's Crown Prince Mohammed bin Salman at Al Salam Palace in the Red Sea port of Jeddah on June 24, 2019. – Pompeo arrived Monday in Saudi Arabia for talks on coordinating with the close ally amid mounting tensions with Iran. (Photo by Jacquelyn Martin / POOL / AFP) (Photo credit should read JACQUELYN MARTIN/AFP via Getty Images) 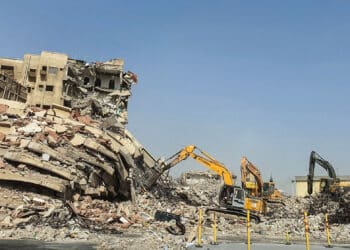 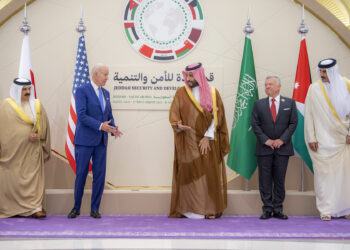 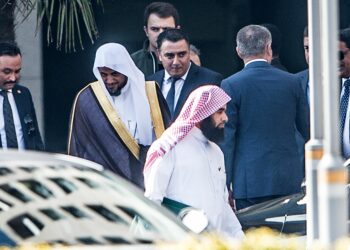 It wasn’t supposed to turn out this way. Abusive governments have declared open season on their critics the world...