"China increasingly and openly wants to reshape the world in its image," Joshua Kurlantzick writes in his new book, Beijing's Global Media Offensive: China's Uneven Campaign to Influence Asia and the World. Whether through state media, outright propaganda or other influence campaigns to spin news coverage and media narratives in China's favor, Beijing is trying to promote what he calls its "brand of technology-enabled authoritarianism."

A senior fellow for Southeast Asia at the Council on Foreign Relations, Kurlantzick has written widely on China's soft and hard power. He is also the author of three other books—A Great Place to Have a War: America in Laos and the Birth of a Military CIA; State Capitalism: How the Return of Statism is Transforming the World; and Democracy in Retreat: The Revolt of the Middle Class and the Worldwide Decline in Representative Government. Kurlantzick's latest book details Beijing's efforts over the past decade to build up Chinese state media and export it around the world—"to build a global media and information and disinformation superpower," as he puts it. While China has invested most of this influence campaign in its immediate region of the Asia-Pacific, and especially Southeast Asia, it has recently expanded its soft power into the Middle East and North Africa, where it also has other aims—namely, exporting a Chinese model of internet control to regimes in the Arab world eager to follow "Beijing's blueprint for high-tech authoritarianism."

In an interview, Kurlantzick discussed how countries like Egypt and Saudi Arabia, along with many states in Africa, are at the forefront of this campaign by China, which he considers "the biggest advocate for closed domestic internets in the world." These regimes are essentially seeking to copy China's model of the internet and impose it on their own societies. "Beijing has built this influence apparatus, often centered on media and information efforts, in an era when Xi [Jinping] is gaining far more control of China's politics at home," he writes. "It also has built this apparatus at a time when the United States and other leading democracies, focused on their own internal dysfunction and on Russia, the more flamboyant and chaotic authoritarian power, initially paid little attention to China's actions within other countries."

The following transcript has been edited lightly for clarity and length.

"China wants to extend the reach of its model of a closed and controlled domestic internet and promote aspects of its technology-enabled authoritarian capitalism. It has some willing and eager customers in the Middle East."

What are China's overall motivations in extending its influence efforts into the Middle East? Are they mainly economic, as China expands trade and other ties in the region, or does Beijing have other political and ideological motivations?

They are primarily economic, but in parts of the Middle East and North Africa, China also wants to extend the reach of its model of a closed and controlled domestic internet and promote aspects of its technology-enabled authoritarian capitalism. It has some willing and eager customers in some of the region's regimes. Certainly, countries like Egypt, Ethiopia—extending a little farther south in Africa—Jordan, Saudi Arabia and others in the region have an interest in potentially copying the ways China has created a kind of "sovereign internet," or an internet that cuts off most of its citizens from the global internet. It is a model being copied by many authoritarian states, but not always as successfully as China.

Even now, with all the protests in China over COVID-19 restrictions—which damage that ideological model—there is still the idea that China's authoritarian capitalism is effective. Most Chinese people only have access to social media platforms and internet without a real link to the outside; it's kind of a walled garden. And overall, at least until China's disastrous zero-COVID strategy, which has hurt its economy, China wanted to promote the idea to welcoming Middle Eastern countries that you could maintain very strict authoritarian rule and still have strong growth and a fairly thriving and innovative private sector, albeit one always subservient to the party-state.

The past three years, however, have really hurt that model. Xi Jinping's authoritarianism, which has moved away from a kind of consensus authoritarianism and really toward one-man rule and a cult of personality, along with his zero-COVID policies and harsh crackdown on China's vibrant private sector, have all hurt the Chinese economy. That has undermined the ideological model, and make it seem potentially less possible that Xi's more statist ideas could exist with a truly innovative and groundbreaking private sector—the kind of balance that, say, Saudi Arabia and the United Arab Emirates want to strike.

How do Beijing's media and information campaigns in the Middle East compare to a region like Southeast Asia? Has China had much to show for them there?

Well, Southeast Asia is China's nearest neighborhood, the area where it is trying to push the United States out as the regional hegemon and where China is flexing its muscles militarily, and the home of the South China Sea and areas adjacent to Taiwan‚ so it's of the highest importance to Beijing. China is also Southeast Asia's biggest trading partner and increasingly the leader on trade integration, along with Japan, as the U.S., under both Republican and Democratic presidents, has mostly abdicated any trade leadership in the Asia-Pacific. The Middle East, though important to China, and increasingly so, still can't be as important as Southeast Asia. Also, many Chinese companies have invested huge sums in Southeast Asia and feel comfortable in the local business environments. 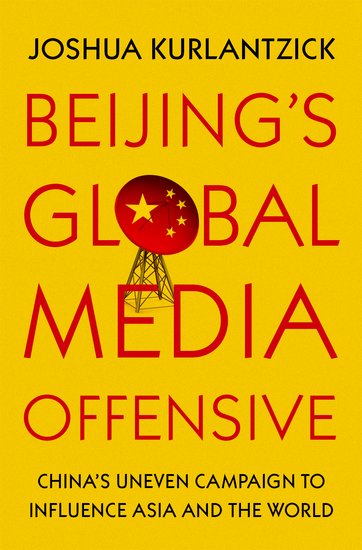 China has had some success with its information campaigns in Southeast Asia, particularly by having Xinhua, its official state news agency, sign content-sharing deals with a lot of local publications, which is getting Xinhua into local language news outlets and increasingly putting it on par in many regional news outlets with other global newswires. China also has been successful in having local entrepreneurs who are clearly pro-Beijing buy up Chinese language news outlets throughout Southeast Asia—and Australia, New Zealand, Canada, the U.S. and other places—and mostly change their content from more independent reporting to clearly a more pro-Beijing take on most events.

And China has had some success, at least before zero-COVID, with "visit diplomacy"—inviting journalists and other opinion leaders to China for short or longer-term stays. Such visits have become somewhat controversial in Southeast Asia, though. For instance, the visits initially seemed to lead to groups of Indonesian Muslim leaders who'd been to China downplaying the atrocities in Xinjiang, which caused a bit of an uproar in Indonesia. Zero-COVID has cut down on some of these visits. Some countries in the region—Singapore, Australia, New Zealand, the Philippines, Vietnam and others—have become more concerned about China's information and disinformation efforts and taken a range of steps to protect themselves and their people.

Middle Eastern governments have played a central role in tamping down regional attention to the Uighurs and whitewashing China's abuses, even endorsing them in the case of Saudi Arabia. However, I think this has less to do with "visit diplomacy" and trying to convince civil society—like in Indonesia, where China was trying to convince civil society about Xinjiang and did not always succeed—and is more a function of repressive Arab governments not wanting to criticize anyone else's repression. Indonesia, after all, is a democracy, and does sometimes criticize repression, as it has done regarding Myanmar. There is also Middle Eastern governments' desire to bolster trade with China and not anger Beijing.

"China's model holds enormous appeal for Saudi Arabia, which wants in some ways what China has tried to have: authoritarian capitalism that also provides high growth, innovation, truly globally competitive companies, and yet corporate leaders who are kept on a leash."

Why has Beijing generally preferred one method over others in its influence campaigns in the Middle East, in this case exporting an authoritarian model of internet controls?

China's ability to influence Middle Eastern countries through some of its strategies in other parts of the region, like wooing diaspora Chinese populations, taking over local Chinese language media, or meddling in democratic elections and politics, is obviously limited in the Middle East. Most of these tools are pretty worthless in the Middle East, compared to how they could be used in Southeast Asia or Taiwan or Australia, or the U.S. even.

You write that "Egypt, which has built increasingly close links to Beijing in recent years, also has taken steps to put into place a China-style system of internet control." What have those controls entailed, and what impact have they had on free speech and access to information in other countries that have adopted them?

China has increasingly invested in Egypt's telecoms sector, providing it with similar technology as used by Beijing to create a "walled garden" internet. There also have been many bilateral meetings with Chinese officials to discuss how to create a "sovereign" or closed internet in Egypt. In addition, Egypt has introduced a range of cyber laws, including cybercrime laws and other similar legislation, that seem in some respects to be based on Chinese laws—like China's very sweeping cybersecurity law, for instance—that serve to make certain types of online behavior illegal. These are laws that also have become increasingly popular among authoritarian regimes in Southeast Asia.

Which country or countries in the Middle East have been the most eager to adopt what you describe as China's "brand of technology-enabled authoritarianism"?

Definitely Egypt. Egypt has been very eager to copy China's internet ideas, and China has been given many contracts to build Egypt's massive new proposed capital, as well as other infrastructure including a wide range of telecoms infrastructure. But I don't think Egypt has the ability to control the internet as well as China—even China's ability breaks down under massive protests, to be sure.

I also think the model holds enormous appeal for Saudi Arabia, which wants in some ways what China has tried to have: authoritarian capitalism that also provides high growth, innovation, truly globally competitive companies, and yet corporate leaders who are kept on a leash, mostly, as in China. It remains to be seen if China can keep this balance, but this seems very similar to Crown Prince Mohammed bin Salman's ideas for Saudi Arabia and the Saudi economy, as do some of China's ideas of allowing a degree of social freedoms—albeit now shrinking—while brooking no real opposition to the party or regime at all.

Israel’s Supreme Court is a stronghold of justice for Jews only. It does not champion universal human rights, but...

US: District Court’s Dismissal of Lawsuit for Murder of Jamal Khashoggi Will Not Stymie Pursuit for Justice