The word "pariah" has carried its own connotation in Washington over the past few years, after Joe Biden's infamous pledge on the campaign trail to make Saudi Arabia "pay the price and make them, in fact, the pariah that they are" for the murder of journalist Jamal Khashoggi. In his first few months as president, Biden released a U.S. intelligence report determining that Saudi Crown Prince Mohammed bin Salman had directly approved of the assassination of Khashoggi in the Saudi consulate in Istanbul.

Now we're witnessing a retraction of not only that "pariah" statement, but the Biden administration's stated commitment of "putting human rights at the center of U.S. foreign policy," a reversal unbefitting of Saudi Arabia's security guarantor. Last week, just as the White House formalized Biden's July visit to Saudi Arabia, where he will meet with the crown prince, the street outside the Saudi Embassy in Washington was officially unveiled as "Jamal Khashoggi Way." The address change is more than a symbolic message to the Saudi government; it's a communal and resounding rejection of Biden's likely normalization with MBS.

Senior U.S. officials are now telling Saudi Arabia that the Biden administration is seeking a "reset" of U.S.-Saudi relations—a departure from the White House's earlier language seeking to "recalibrate" the relationship. This "reset" includes an apparent concession of "effectively moving on" from Khashoggi's brutal murder. This wouldn't just be a betrayal of Khashoggi's life and legacy and a reversal of Biden's campaign promise; this is simply bad policy. It forsakes accountability in dealing with autocrats with egregious human rights records—who depend on the U.S. for their security—all for the unlikely aims of short-term relief on the oil market and Saudi normalization with Israel and its permanent occupation of Palestinian territory.

The address change is more than a symbolic message to the Saudi government; it's a communal and resounding rejection of Biden's likely normalization with MBS.

"Both sides have decided that for the sake of achieving peace and stability in the Middle East, we need to move past it," an unnamed senior U.S. official told CNN—"it" being the murder and dismemberment of Khashoggi by a Saudi hit squad dispatched by MBS. But that's precisely where Brett McGurk, the top Middle East adviser in the White House, and others in the administration likely pushing Biden's reversal have it completely wrong. For decades, post-colonial despots in the region have promised peace and so-called stability in exchange for American complicity and silence on their human rights abuses. From Egypt to Saudi Arabia and beyond, autocrats and absolute monarchs have threatened chaos if their "order" was disrupted—imma ana aw al-fawda, "either me or chaos." The disastrous consequences of this ultimatum include war, repression and mass displacement.

In the Saudi crown prince's eyes, "moving past" Khashoggi's murder is the only logical next step for the U.S., an ally that only last month applied no pressure on Israel after its military killed journalist Shireen Abu Akleh, a U.S. citizen, in the occupied West Bank. The disparity between the responses to the murders of Khashoggi and Abu Akleh are obvious to MBS, only further solidifying that Biden's "pariah" talk was selective and ultimately empty.

We're witnessing a retraction of not only Biden's "pariah" statement, but his administration's stated commitment of "putting human rights at the center of U.S. foreign policy," a reversal unbefitting of Saudi Arabia's security guarantor.

Following the example of Jamal Khashoggi Way, it's high time for a moral reset of U.S. foreign policy. One can imagine a potential visit to Washington in the near future by MBS after Biden's trip to Riyadh. The crown prince and other royals visiting the Saudi Embassy won't be able to avoid Jamal Khashoggi Way. Will the House of Saud, with all their oil wealth, move their embassy to avoid the embarrassment? It won't matter; Jamal Khashoggi Way will follow them all over Washington.

The impetus for renaming the street came from the then-U.N. special rapporteur, Agnes Callamard, and her investigation into Khashoggi's unlawful killing. She called on the international community to work to rename the streets of Saudi embassies and consulates around the world to send a message about truth and accountability for his heinous murder. Callamard, who is now the secretary general of Amnesty International, has called Biden's backtrack on MBS and his upcoming visit to Saudi Arabia a "betrayal for Jamal Khashoggi, for Yemen, and a betrayal of what the Democratic Party stood for over the last three years."

"They are returning to a path that has been well trodden by generations of American leaders," she added of Biden and his administration. "He is not treading a new path, not offering a new foreign policy at a time when the challenges we are confronting are such that the only way to respond to them is by building and creating something new."

Biden should welcome more Jamal Khashoggi Ways in the U.S. and around the world, encouraging civil society to mobilize in support of accountability for the murder of Khashoggi. In a representative democracy, U.S. foreign policy would reflect that kind of mobilization and the popular demand that Saudi Arabia answer for its crimes. Instead, Biden will take a familiar flight to Riyadh, like so many American presidents before him, to legitimize a crown prince he promised would "pay the price."

The new street sign for Jamal Khashoggi Way, unveiled during an event outside the Saudi Embassy in Washington, D.C., June 15, 2022. (Photo by Nathan Howard/Getty Images)

Militarily and politically, the picture remains grim in the Middle East’s poorest country. 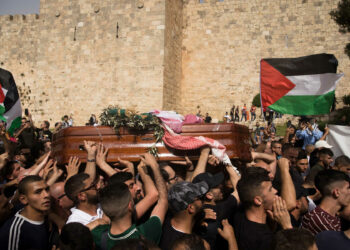 That thing in her hand isn't a furled umbrella: / It's the microphone that records sounds / of birds,...