Last month, Israeli soldiers raided the West Bank offices of six of the most prominent, widely respected Palestinian human rights and civil society groups, seizing their files and welding shut their doors. Less than a year earlier, Israel's Defense Ministry had designated the six as "terrorist" organizations, in what was seen at the time as a push to get European countries to stop funding them.

What was the evidence for these claims? We don't know, because the ministry's alleged evidence is "secret," making it all but impossible for Al-Haq, Defense for Child International-Palestine and the other civil society organizations to rebut the allegations.

What we do know is that the dossier of "secret" evidence that Israel since shared with the United States and nearly a dozen European countries has been entirely unconvincing. In July, 10 European countries and the European Union publicly rejected Israel's terrorism claims and resumed funding the Palestinian organizations, which had been frozen last year following Israel's "terrorist" designations. Last month, the United States stated that it has not seen any evidence that would make it treat the groups as terrorists, and the CIA, in a classified report, apparently said it was unable to corroborate the Israeli accusations.

The legitimacy of engaging in the practice of human rights cannot be conditioned on the identity of the practitioner or their alleged ties to others. It certainly cannot be delegitimized with baseless accusations that human rights work is serving the agenda of foreign powers or terrorist organizations.

Perhaps this is unsurprising because Israel has not actually accused any of these groups of committing or otherwise supporting a single act of terror. It has not arrested, indicted or convicted a single staff member on terrorism charges as part of their work in the six organizations. Indeed, if we are to take Israel's allegations at face value, the Israeli government seems to have no issue with the human rights and humanitarian work these organizations are carrying out. Instead, the allegations appear to amount to claims that they are carrying out their work at the behest of, and to serve the interests of, other terrorist organizations.

Take, for example, the Israeli Defense Ministry's official designation of Al-Haq, the widely respected Palestinian human rights group, as a terrorist organization, which makes clear the designation is "not because of its said civil activities" but because of alleged "ties" to the Popular Front for the Liberation of Palestine, or PFLP, a Palestinian political party and militant group. Israel designated the PFLP as a terrorist organization in 1986, alongside Fatah, the party now led by Palestinian President Mahmoud Abbas, and the Palestinian Liberation Organization, or PLO, which Israel recognized as the sole representative of the Palestinian people just seven years later. All three remain on Israel's terrorist list to this day.

Al-Haq, the Israeli designation continues, is "operating on [the PFLP's] behalf and upon its instructions as part of the terror organization's struggle against Israel." Driving the point home, when an officer claiming to be from Israel's Shin Bet internal security service reportedly called Shawan Jabarin, the general director of Al-Haq, on Aug. 21, days after the raid on its offices, he threatened him with imprisonment—not for any actions he or the group has taken in his 16-year tenure running Al-Haq, but for the simple act of opening the human rights organization's doors every morning.

The legitimacy of engaging in the practice of human rights cannot be conditioned on the identity of the practitioner or their alleged ties to others. It certainly cannot be delegitimized with baseless accusations that human rights work is serving the agenda of foreign powers or terrorist organizations.

When other countries have moved to outlaw human rights organizations, their stated logic has been eerily similar—not protesting the substance of their human rights work but accusing them of doing that work on behalf of nefarious, often foreign actors by virtue of their international funding. When Russia moved to shut down Human Rights Center Memorial, in Moscow, it did so wielding accusations that the NGO was secretly acting as a foreign agent and "justifying terrorism and extremism." When Egypt forced the closure of the Arab Network for Human Rights Information, it did so with a combination of draconian registration requirements for organizations that receive foreign funding. When Hungary began cracking down on NGOs, including those that support refugees, it too started by placing oppressive restrictions on organizations that receive foreign funding.

The behavior of Israel, like other countries shutting down human rights organizations, is never incidental. It's endemic to regimes that rely on systematic human rights violations and the abuse of counterterrorism laws to maintain power over the people they rule undemocratically.

The difference between Israel and most other authoritarian countries that have shut down human rights groups is that most of those countries claim the groups are acting in cahoots with the West as part of covert attempts at ideological influence, or even regime change. Israel cannot comfortably make similar claims against the EU, its largest trading partner, or the U.S., its military and diplomatic patron. So instead of accusing these Palestinian human rights groups of advancing a nefarious Western plot, Israel is accusing them of serving the interests of a terrorist organization. Farcically, it is effectively accusing its closest Western allies of funding terrorism—an allegation 10 European states took seriously, investigated for nearly a year and roundly rejected.

The behavior of Israel, like other countries shutting down human rights organizations, is never incidental. It's endemic to regimes that rely on systematic human rights violations and the abuse of counterterrorism laws to maintain power over the people they rule undemocratically. The motivations for different regimes may vary, of course, between Sisi's Egypt and Putin's Russia. In Israel's case, its abuses are endemic to the military governments that have ruled over various groups of Palestinians for nearly all of Israel's existence since achieving statehood, and to the wider system of apartheid that privileges Jewish Israelis over oppressed and dispossessed Palestinians. (Palestinian citizens of Israel lived under a military government from 1948 until December 1966, which in many ways served as the model for the military government Israel installed in the occupied territories just seven months later.)

An Israeli delegation reportedly traveled to Washington earlier this month to press its case on the "terrorist" designations with the State Department and U.S. intelligence agencies. The visit, reported by Axios, made clear that Israel is not backing down on its abuse of counterterrorism laws to criminalize Palestinian civil society, as "the delegation stressed in its meeting with State Department officials that Israel is not acting against these NGOs because of their political activity, but because of what the official said was their involvement in terrorism."

The State Department has only responded meekly to all this. Rather than criticize Israel for attempting to criminalize civil society in Palestine, the State Department said last week that it is "continuing to review" whatever "additional information" Israel has shared.

U.S. inaction is endorsing and enabling Israel's crackdown on Palestinian civil society. Even demanding that Israel reverse the criminalization of these groups would be far too little, far too late. The U.S., and all democratic countries, should instead recognize their own role in aiding and abetting Israel's abuses, and stop rewarding it with billions in military aid and unquestioned political support.

Activists hang a poster at the entrance to the Palestinian NGO Al-Haq, after it was raided and shut down by Israeli soldiers, in Ramallah, West Bank, Aug. 18, 2022. (Photo by Ilia Yefimovich/picture alliance)

As more countries in the Middle East re-establish diplomatic ties with his regime, many Syrians are losing hope of...

'The Darkness Inside,' an Excerpt

This is the story of the seemingly ordinary men who walk among us—who were once “emirs” in Syria and... 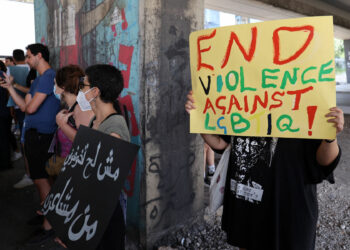 Several recent episodes show how Lebanon's LGBTQ+ community is still struggling to express itself freely and protect its rights,...