First published in The Atlantic Council on January 15, 2021

In a recent MENASource blog, the author raises the question of whether the State Department could grant head of state immunity for Saudi Crown Prince Mohammed bin Salman (MBS) in a federal lawsuit in exchange for lifting the blockade against Qatar. The civil lawsuit accuses the Crown Prince of ordering a team of his personal mercenaries, dubbed the "Tiger Squad," to Canada in 2018 to kill Dr. Saad al-Jabri, a notable former Saudi cabinet minister and major general. Making such an exchange would not be in the interest of the American people, American laws, or American values. It would break with legal precedent regarding head of state immunity designations and erode an important means of accountability for brutal autocrats like MBS.

Head of state immunity, which derives from customary international law, helps ensure properly functioning relations amongst countries. The doctrine allows heads of state to perform their duties without fear of being prosecuted or sued in foreign jurisdictions. In the United States, the State Department makes head of state determinations for immunity purposes, which are then conveyed to the relevant court by the Justice Department. The formula for determining the head of state is quite simple, as the role typically comes with a title, such as king or president. There is no gray area in almost all cases. US courts treat recommendations from the Justice Department with absolute deference.

However, the Saudi Crown Prince is not a head of state. The title is attached to his father, King Salman bin Abdulaziz Al Saud, who holds ultimate authority in the Kingdom and can demote the Crown Prince at any time, as he did to his predecessor Mohamed bin Nayef. Those who advocate for such immunity of course recognize that MBS isn't actually the head of state, but propose that the State Department grant him head of state immunity as the "de facto" Saudi ruler.

Immunity as a "de facto" head of state has been sought before, but never successfully. In an analogous case in 2010, the State Department declined to provide United Arab Emirates (UAE) Crown Prince Mohammed bin Zayed (MBZ) a suggestion of immunity. Khaled Hassen, the plaintiff, had sued three UAE officials—MBZ, General Saeed Al Darmaki, and President Sheikh Khalifa bin Zayed al Nahyan—in federal district court for damages resulting from his imprisonment and torture in the UAE. The State Department provided a suggestion of immunity for MBZ's uncle President Sheikh Khalifa, the de jure head of state, but refused to provide one for either MBZ or General Al Darmaki on the grounds that neither of the men, despite their senior positions, qualified under the simple head of state formula.

Likewise, a federal court has considered and rejected a similar "de facto" head of state immunity claim. In a 1990 criminal case involving charges of conspiracy to import cocaine into the United States, Manuel Noriega argued that his de facto control over Panama gave him immunity from prosecution in Florida Southern District Court. The court dealt with the point quickly: "since the United States has never recognized General Noriega as Panama's head of state, he has no claim to head of state immunity." The language of the court's opinion could aptly be applied to MBS' case: "to hold that immunity from prosecution must be granted 'regardless of his source of power or nature of rule' would allow illegitimate dictators the benefit of their unscrupulous and possibly brutal seizures of power."

Full disclosure is in order. The authors of this article are not unbiased observers on the issue of immunity. With co-plaintiff Hatice Cengiz, the widow of Saudi dissident Jamal Khashoggi, Democracy for the Arab World Now (DAWN) has brought suit in Washington DC federal court against Crown Prince MBS and twenty-eight Saudi members of another Tiger hit squad. We're seeking damages for the murder of the founder our organization and US-resident Khashoggi, who was suffocated then carved up in the Saudi Consulate in Istanbul. A grant of head of state immunity would also end a lawsuit brought by prominent journalist Ghada Oueiss under US law against MBS for vicious attacks and death threats against her because of her critical coverage of his human rights abuses.

American laws that allow for rogue royal princes like MBS to be held accountable for gross human rights violations, such as extrajudicial killing and torture, protect Americans and American values. These legal mechanisms not only allow the possibility for justice, but also provide a measure of deterrence for men like MBS. A head of state designation would erase these legal mechanisms for MBS and other "de facto" rulers, who would acquire an absolute immunity from legal action in the US regardless of what they have done. Granting such immunity would not only be an insult to the victims and victims' families seeking redress and justice, but would also risk the perception of offering impunity for similar crimes, fearless of any consequence in US court.

Upon the death of his father, King Salman, the Crown Prince will most likely assume the mantle of King and gain the accompanying absolute immunity from actions in US courts afforded to official heads of state. In the meantime, MBS and his lawyers in the Al-Jabri case are seeking to run out the clock by adding a new "de facto" category to the legal doctrine. Such a change to US law and precedent in return for reconciling with Qatar would be a "bargain" for MBS and other would-be "de facto" heads of state, but it would be a bad deal for America.

Michael Eisner is the general counsel of Democracy for the Arab World Now (DAWN) and a former State Department attorney.

Jack Steele is a research assistant at DAWN.

When reports surfaced in April that senior security officials from Saudi Arabia and Iran had met in Baghdad to...

Saudi Arabia is no stranger to political repression, but in the years following Crown Prince Mohammed bin Salman’s rise...

While the Saudis, prodded by the new US Administration, are now looking for a way out of the quagmire... 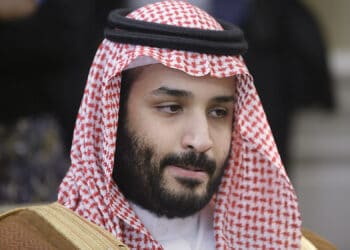 After Court Approves Alternative Service, Lawyers for MBS put in Notice of Appearance.