Lawsuit against MBS Advances, Embassy Street to be Renamed, Saudis to be Sanctioned, as Lobbyists Drop Contracts

(Washington, D.C. October 1, 2021) – Three years since the murder of Jamal Khashoggi by Mohamed bin Salman (MBS) and his Saudi co-conspirators, the organization he founded, Democracy for the Arab World Now (DAWN), has made important progress in its pursuit of truth and accountability for his murder, as it seeks to uphold his vision to promote freedom and democracy in the Middle East and North Africa (MENA), and reform U.S. policy in the region, the organization said during a press briefing held today.

MBS has been forced to respond to the lawsuit filed by the organization and Khashoggi's widow, Hatice Cengiz, in federal district court, while the Washington D.C. City Council will hold a hearing to rename the street in front of the Saudi embassy in his name. The organization also succeeded in forcing a lobbyist to drop its contract with the Saudi government; established the submission criteria, and submitted the first Saudi official nomination, for the "Khashoggi Ban" and Magnitsky Act sanctions; and highlighted the culpability of 17 Saudi officials in its "Culprits Gallery" published since the organization relaunched one year ago.

"In murdering our founder, MBS thought he could silence a powerful voice for reform and change," Whitson said. "He was wrong. Jamal's voice has become more powerful in his death. It echoes across the region and propels our work at DAWN.  We carry on his legacy and continue his work, and we will not be silenced."

"In murdering our founder, MBS thought he could silence a powerful voice for reform and change. He was wrong. Jamal's voice has become more powerful in his death. It echoes across the region and propels our work at DAWN.  We carry on his legacy and continue his work, and we will not be silenced."

The speakers paid homage to the courageous Saudi dissident Khashoggi and described the efforts to hold his killers accountable and fulfill his mission of promoting human rights and democracy in MENA.

While MBS has attempted to evade justice on jurisdictional grounds in the organization's lawsuit, DAWN is confident that the court will reject the motion to dismiss and allow the lawsuit to proceed. In addition, this year, in coordination with the U.S. State Department, DAWN launched the Khashoggi Ban Working Group, which will designate and impose travel bans on culprits who on behalf of a foreign government target political dissidents abroad or their families at home. DAWN chairs the Working Group, which includes more than forty other civil society and human rights groups. 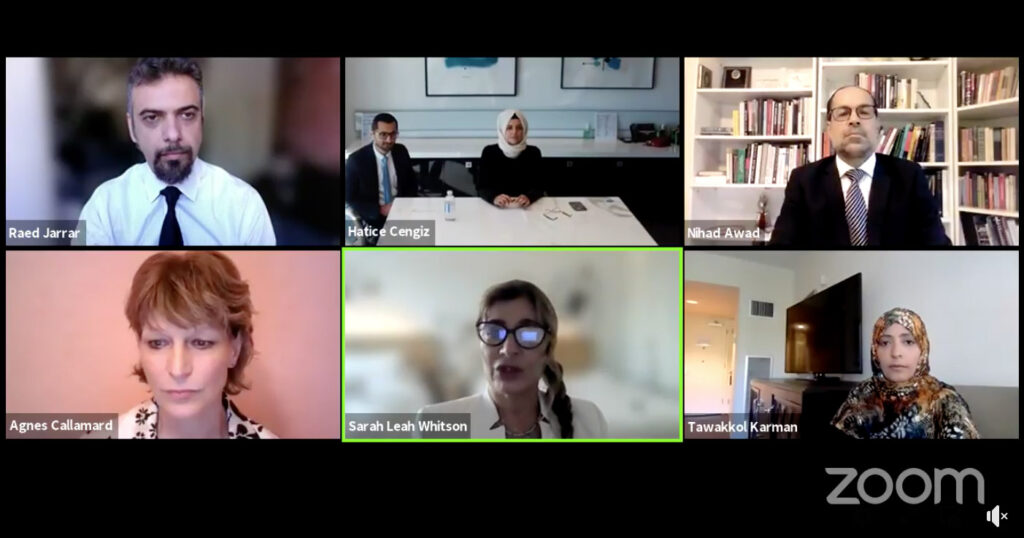 A snapshot of the speakers at DAWN's press briefing, "Justice for Jamal: Three Years Later."

"Saudi state officials involved in the detention, torture, mistreatment and murder of activists and the relatives of Saudi dissidents abroad have been put on notice that we are watching them and that we will hold them accountable for their actions," said DAWN's Advocacy Director Raed Jarrar.  "As the abusers target their own citizens, we will target them, exposing, sanctioning and banning them from the U.S."

In its first year of existence, DAWN has also launched the DAWN Culprits Gallery and the Lobbyist Hall of Shame, which expose abusers in the MENA region and their enablers here in the United States. The Culprits Gallery shines a light on state actors, often bureaucrats, who operate in the shadows but who play critical roles in the machinery of repression across the MENA region. DAWN has already submitted one of the Saudi culprits it identified for Magnitsky Sanctions and will prepare submissions for others in the coming year.

"Jamal Khashoggi was not the only one to face the brutality of the regime, and we must stand up for those victims. Enactment of this bill would send a clear message to human rights defenders, dissidents and journalists worldwide and would reaffirm an unshakeable American commitment to basic rights and freedoms."

DAWN's Lobbyist Hall of Shame exposes US-based lobbyists hired by abusive MENA governments, who try to cover up their abuses and create a veneer of legitimacy for their clients. Within two weeks of DAWN's exposure of Ed Newberry and his firm Squire Patton Boggs' role as lobbyists for the abusive Saudi Media Center, the firm dropped its contract with the Saudi government agency.

"We will be going after these lobbyists one by one," Whitson said. "We are demanding they end their role in contributing to human rights abuses, and demanding that our own members of Congress refuse to meet with them."

DAWN has also helped persuade the Washington, DC, City Council to hold a public hearing on November 3 on draft legislation to rename the street in front of the Saudi embassy "Jamal Khashoggi Way." Renaming the street in front of the Saudi embassy fulfills one of the recommendations of the United Nations, as set forth in the former U.N. Special Rapporteur Callamard's investigation and report on the extrajudicial assassination of Jamal Khashoggi. Khashoggi Way will serve as a constant reminder to all who pass, including Saudi diplomats, that the Saudi government, including the man who ordered Khashoggi's murder must be held accountable, and that regardless of Crown Prince MBS' grand declarations about the future and his many business deals, he will always be a murderer.

"We have certainly shattered their veneer," said Callamard. "Gone are the pretenses of modernity. Gone are the beautiful outfits that MBS wore before people's eyes. The emperor is completely naked, and that my dear friends is something we have achieved."

DAWN has also supported the Protection of Saudi Dissidents Act, introduced by Congressman Connolly. Khashoggi was a constituent of the Congressman, whose proposed legislation requires the Administration to issue a report on whether the U.S. intelligence committee fulfilled its duty to warn Khashoggi of threats against his life. The legislation also prescribes a range of punitive measures, including restrictions on arms sales and the closure of Saudi diplomatic facilities, to punish and hold the Saudi government accountable for human rights violations at home and abroad. Congressman Connolly's proposed legislation passed the House in overwhelming bipartisan fashion earlier this year, and the Congressman has reintroduced it as a proposed amendment to the National Defense Authorization Act.

"Jamal Khashoggi was not the only one to face the brutality of the regime, and we must stand up for those victims," Congressman Connolly said. "Enactment of this bill would send a clear message to human rights defenders, dissidents and journalists worldwide and would reaffirm an unshakeable American commitment to basic rights and freedoms."

DAWN noted the one year anniversary of its publication Democracy in Exile, which upholds Khashoggi's legacy as a political exile from Saudi Arabia by serving as an institutional platform for political exiles from the Middle East to express their ideas and their prescriptions for democratic reform in the MENA region. By providing a platform for dissidents and including them in policy meetings in Washington, DAWN seeks to ensure their voices are part of the discussion about the persistent, undying imperative for democracy and freedom in the Middle East.

A key part of DAWN's work derives from DAWN's identity as an American organization, and from the fact that America plays a disastrous and outsize role in propping up dictators and tyrants in the region.

"We have worked behind the scenes to challenge every arms sale, or arms gift, to abusive governments who certainly do not represent the interests of the people they rule over," Whitson said. "Though the Biden Administration has broken promise after promise to promote and defend human rights in the region, DAWN persists in its efforts to change the approach of the U.S. foreign policy community so that in the future, the U.S. will match its conduct with its rhetoric of support for freedom and democracy."

The International Monetary Fund’s new US$3 billion loan agreement with Egypt largely continues an economic approach that leaves the economic rights of millions...

Ahead of the visit by King Abdullah of Jordan to Washington D.C. for meetings in Congress, Democracy for the...